Legatus founder Tom Monaghan has often expressed that it is ultimately The Golden Rule and his Catholic values that led to his greatest successes, both in and out of business. Legatus is founded on those same principles, supporting virtuous business leadership. It is also the basis of The Journey to Excellence Program offered by the Spitzer Center for Visionary Leadership.

The program is based on Fr. Robert Spitzer’s identification of the “Four Levels of Happiness” reflecting classical and Christian insights into the human desire for happiness. The Four Levels begin with Level 1 — immediate gratification of the self; Level 2 — ego-centeredness; Level 3 — a contributive ethic of working toward the greater good; and Level 4 — striving for ultimate goodness. For secular organizations, the goal is to create at least a Level 3 environment which promotes the Golden Rule of doing unto others as you would have them do unto you. 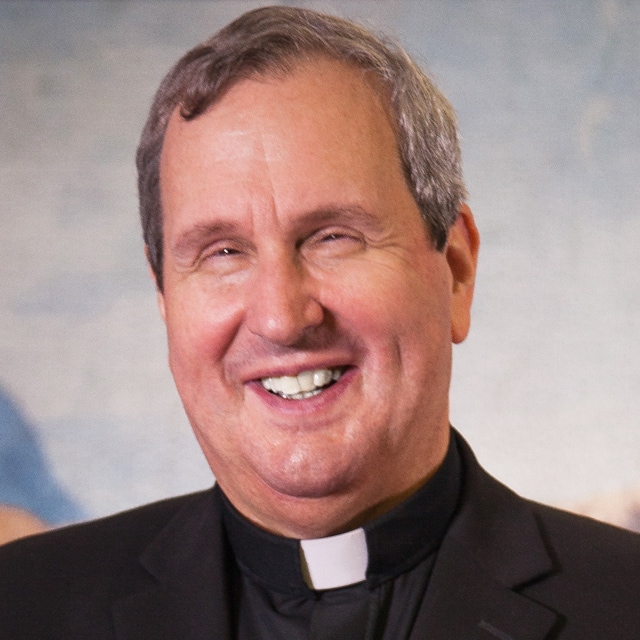 It was Fr. Spitzer’s talk on the “Four Levels of Happiness” at a Legatus chapter which first got the attention of Jim Berlucchi who was the executive director of Legatus from 1991 to 2001. Father Spitzer was still the president of Gonzaga University at the time.

“When I heard this talk, in Ventura, California, I made a directive to have him speak to as many chapters as possible,” Berlucchi said. “It was such a relevant message. I got him to speak at our national meeting and then he became our international chaplain for several years.” In 2003, Berlucchi helped co-found the Spitzer Center for Visionary Leadership and later became its first executive director.

The Four Levels of Happiness was a program that Fr. Spitzer had used at Gonzaga University and rolled out as a business program — called Journey to Excellence — through the Spitzer Center in 2008. The goal, he explained, is to overcome selflimiting behaviors by enhancing the culture, virtue, and leadership through helping employees understand happiness based on what philosophers and theologians have agreed on for over 2,400 years.

According to Berlucchi, the program helps participants recognize their own behaviors that are holding them back personally, and ultimately hampering the culture of the entire organization. “It brings Catholic values into the workplace in a way that is nonsectarian,” Berlucchi said.

Father Spitzer explained that he was nearing the end of his time at Gonzaga when he started the Spitzer Center to keep his corporate work going. “The Journey to Excellence program helps to integrate Catholic formation to a more pluralistic audience,” he said.

The goal, Fr. Spitzer explained, is to get everyone thinking and acting on a Level 3, collaborative way. Level 4 includes transcendence and faith, but in a business environment, he said that it is offered on a volunteer basis but often with surprising results.

“The Golden Rule is another way of saying Level 3, wanting the good for others that you want done to you,” Fr. Spitzer said. “That will lead to looking out for what is just to all of the stakeholders.”

FRUITS OF THE PROGRAM

Rob Reed and his wife Stacie are members of the Omaha, Nebraska Chapter. He is the president and CEO of Physicians Mutual Insurance and brought the Journey to Excellence program to his 1,000 employees last year.

“You think you have a good handle on things, but the assessment of our company culture was illuminating,” he said. “It pointed out many positive things, as well as the areas where we could use improvement.”

Although the fourth level has to do with God, Reed offered it to his employees. “We got rave reviews,” he said. “It showed a yearning to explore that spiritual side. It’s something that will affect them beyond what they do for eight hours at work.”

Reed noted that changing the culture of an organization takes time but it’s worth the commitment. “It’s been pretty cool to see all the leaves that have grown from this original seed.”

Andy Newland, president of Hercules Industries, and his wife Lori belong to the Denver Legatus Chapter. Five years ago, he immersed his 530 employees in the Journey to Excellence program. “As a Catholic business owner, we subscribe wholeheartedly to wanting a company where people are happy to come to work,” he said.

Newland said they’ve made several changes to encourage greater cooperation and move to a Level 3 organization. “We changed our compensation program and got rid of commissions, creating a fully salaried sales force with a group bonus,” he said. “Commissions were leading to self-serving purposes often against the common good.” He explained that this rectified situations such as one branch delivering 70 miles away to a customer who was only one mile from another branch, in order to gain the commission.

Another tangible result was the establishment of an employeehardship fund allowing people to make charitable donations to help co-workers with needs such as help when a flood destroys a home or a when someone needs help traveling to a funeral. “We were shocked by people’s strong desire to help one another and the amount of support that poured in,” Newland said. In two years they have raised over $100,000.

“We wanted an atmosphere that respected human dignity,” he said. “And when people want to come to work, you are also going to do better in business.”