Board of Episcopal Advisors

The Spitzer Center Board of Episcopal Advisors is made up of diocesan Bishops and Archbishops whose patronage and counsel have been, and continue to be, instrumental in advancing the mission of the Spitzer Center for Visionary Leadership. 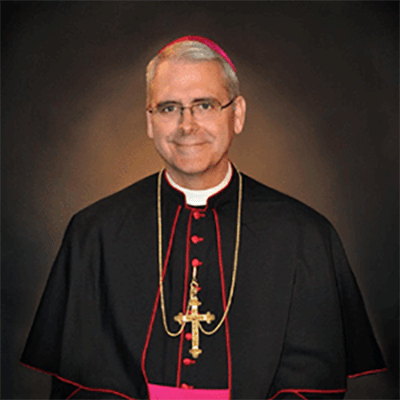 The Most Reverend Paul S. Coakley

Archbishop of the Archdiocese of Oklahoma City

Archbishop Paul S. Coakley was born to John and Mary Coakley in Norfolk, Va., in 1955 and lived there with his father, mother and older brother, John, until he was age 2. The family relocated to Metairie, La., where his sister, Mary Christina, was born. After beginning his elementary education at Saint Mary Magdalen Catholic School, the family moved in 1965 to Overland Park, Kan.  Archbishop Coakley’s secondary education was completed in public schools in Overland Park.

After graduation from high school, he attended the University of Kansas where he completed his undergraduate studies in English and Classical Antiquities in 1977. During this period he was a student in KU’s Integrated Humanities Program, where he studied under John Senior, Dennis Quinn and Frank Nelick.

Upon completing university studies, Archbishop Coakley traveled in Europe and briefly considered a monastic vocation at the Abbey of Notre Dame de Fontgombault in France, before returning to begin seminary studies for the Diocese of Wichita in 1978.

On Dec. 16, 2010, Bishop Coakley was appointed by Pope Benedict XVI as the fourth Archbishop of the Archdiocese of Oklahoma City.  He was installed as metropolitan archbishop on Feb. 11, 2011. 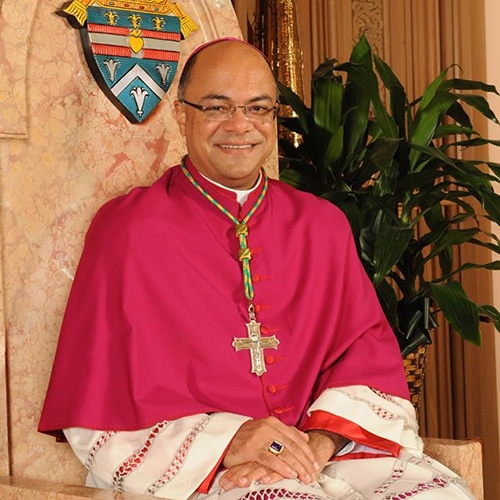 The Most Reverend Shelton J. Fabre

Bishop of the Diocese of Houma-Thibodaux

Bishop Fabre was born October 25, 1963 in New Roads, Louisiana and is the fifth of six children. He was ordained a Deacon on December 10, 1988 by Archbishop Peter L. Gerety at St. Jan-de-Doperkerk in Leuven, Belgium and then ordained a Priest on August 5, 1989 by Bishop Stanley J. Ott at St. Joseph Cathedral in Baton Rouge, LA. In December of 2006 he was appointed Auxiliary Bishop of the Archdiocese of New Orleans by Pope Benedict XVI; later ordained an Auxiliary Bishop of New Orleans by Archbishop Alfred C. Hughes at the Cathedral-Basilica of St. Louis, King of France, in New Orleans on February 28, 2007. In September 2013 he was appointed Bishop of Houma-Thibodaux and installed as Bishop in October of 2013.

Bishop Fabre holds an MA and BA in Religious Studies from the Katholiek Universiteit te Leuven in Louvain, Belgium and a BA in History from St. Joseph Seminary-College in St. Benedict, LA.  He graduated from Catholic High School of Pointe Coupee in New Roads, LA. Since September 2013 he has served as Bishop of the Diocese of Houma-Thibodaus. Prior to that he was Auxiliary Bishop of New Orleans, Vicar General and Moderator of the Curia. He also served as Pastor and/or Associate Pastor of many churches within Louisiana between 1989 and 2007. He is a Member of the United States Conference of Catholic Bishops and serves as Chair of the Subcommittee for African-American Catholics. 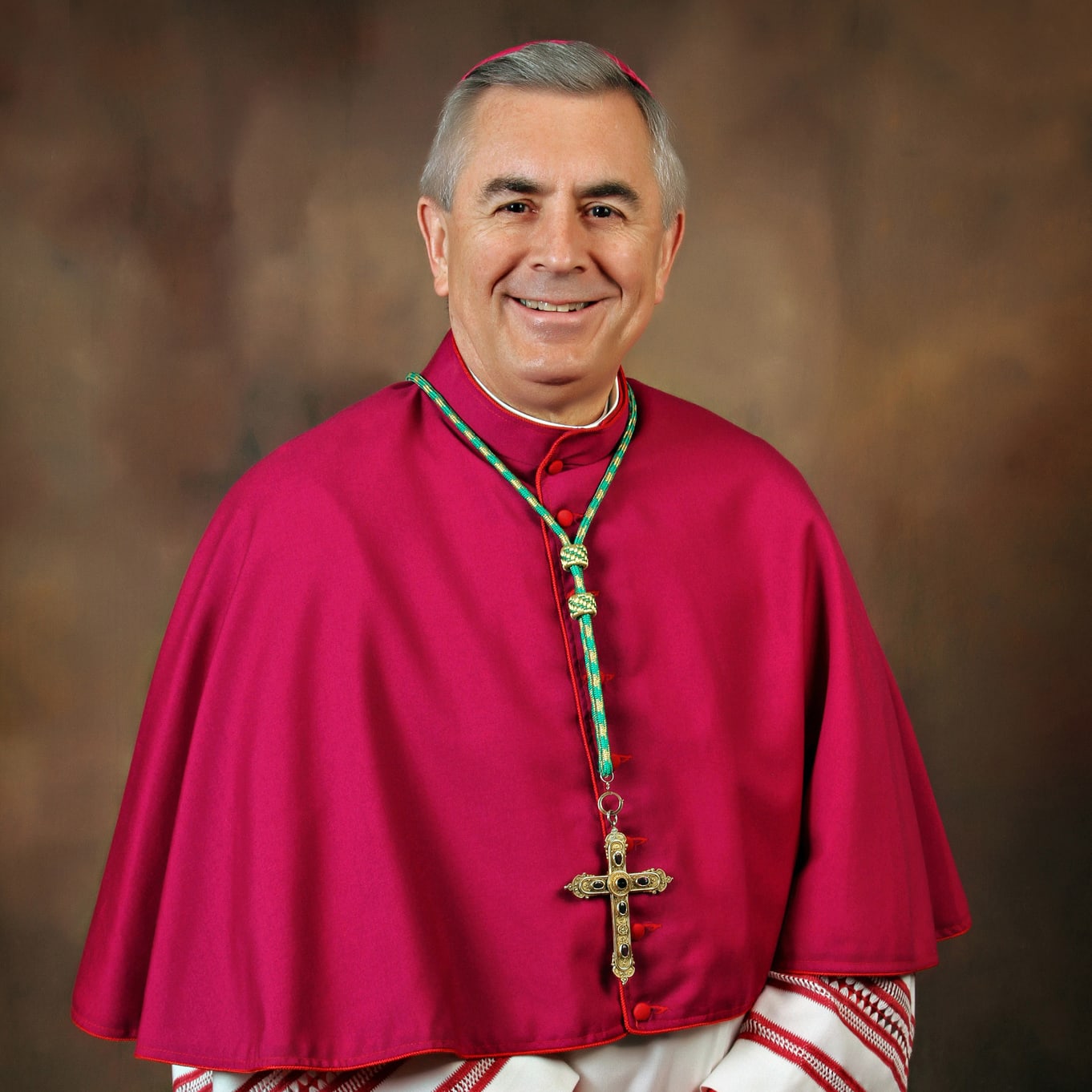 The Most Reverend Ronald W. Gainer

Bishop of the Diocese of Harrisburg

Chairperson of the Board of Episcopal Advisors

Bishop Gainer was born August 24, 1947, in Pottsville, PA. After studies for the priesthood he was ordained a Priest for the diocese of Allentown on May 19, 1973. He completed studies at St. Charles Borromeo Seminary in Philadelphia, earning a Master of Divinity degree, summa cum laude and has earned a licentiate degree in Canon Law and a diploma in Latin Letter from the Pontifical Gregorian University in Rome in 1986. Bishop Gainer was consecrated and installed as Bishop of Lexington, KY on February 22, 2003. He was then appointed the eleventh Bishop of Harrisburg by his Holiness Pope Francis on January 24, 2014 and was installed as Bishop of Harrisburg on March 19, 2014.

For much of his Priesthood Bishop Gainer served in parish, campus ministry, marriages and family, and tribunal positions. As Secretary of Catholic Life and Evangelization for the Diocese of Allentown he supervised 14 diocesan offices and the promotion of the works of spiritual renewal and evangelization. He currently serves as President of the Pennsylvania Catholic Conference. On the national level, he is a member of the United States Conference of Catholic Bishops (USCCB). He has served as Chair of the Region III and V of the USCCB as well as having served on the Administrative Committee, the Committee on Priorities and Planning, the Committee on Catholic Education, the Committee for Canonical Affairs and Church Governance, as well as a regional representative to the USCCB Committee for the Protection of Children and Young People, and liaison with the North American Forum on the Catechumenate. He is also on the Board of Directors of: Saint Charles Borromeo Seminary, Cross Catholic Outreach and Holy Family Radio. 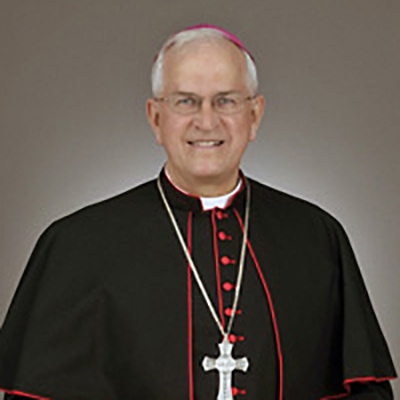 The Most Reverend Joseph E. Kurtz

Archbishop of the Archdiocese of Louisville

His Holiness Benedict XVI appointed Most Reverend Joseph E. Kurtz, D.D. as the fourth Archbishop and ninth bishop of the Archdiocese of Louisville on June 12, 2007. He was installed as Archbishop of Louisville on August 15, 2007. Before coming to Louisville, Archbishop Kurtz served as Bishop of Knoxville from 1999 to 2007.

Born on August 18, 1946 in Mahanoy City, Pennsylvania, Archbishop Joseph E. Kurtz earned bachelor (1968) and master of divinity (1972) degrees from St. Charles Borromeo Seminary in Philadelphia and a master’s degree in social work from the Marywood School of Social Work in Scranton, Pennsylvania, in 1976. Archbishop Kurtz was ordained a priest for the Diocese of Allentown on March 18, 1972.

Before becoming Bishop of Knoxville, Archbishop Kurtz served for 27 years in the Diocese of Allentown, Pennsylvania, in charge of social services, diocesan administration, and parish ministry. He was pastor of Notre Dame of Bethlehem Parish in Bethlehem, PA, from 1996 to 1999, and St. Mary Parish in Catasauqua, PA from 1988 to 1996, associate director and later executive director of the Catholic Social Agency and Family Life Bureau from 1976 to 1994, and diocesan coordinator for health affairs from 1991 to 1998.   He also served in formation at St. Pius X Seminary, as an instructor at Mary Immaculate Seminary, and as the assistant director and promoter of vocations for the Diocese of Allentown. Archbishop Kurtz received the distinguished title of monsignor in 1986.

Archbishop Kurtz has served on numerous boards, including service on the Pennsylvania Catholic Conference from 1977 to 1998 and as the president of the board of directors of the Catholic Social Agency from 1988 to 1999. In Knoxville, Archbishop was a member of the Association of Christian Denominational Leaders from 2000 to 2007 and a member of the 2002 class of Leadership Knoxville.  He served as Vice President of the United State Conference of Catholic Bishops (USCCB) from 2010 to 2013, as the President from 2013 to 2016, and in those capacities also served as a member of the Conference’s executive and administrative committees.  Archbishop was on the board of Leadership Louisville from 2008 to 2014 and on the board of St. Charles Seminary (Philadelphia, Pennsylvania) from 2007 to 2014.

In November of 2017, the bishops of the United States elected Archbishop Kurtz as the chairman of the Committee for Religious Liberty, which he served on until 2019. Archbishop Kurtz serves as the Episcopal Moderator for the National Catholic Partnership on Disability and Engaged Encounter and as the Board chair for the Catholic Education Partners. He is currently on the Board of Trustees of the Catholic University of America as well as the Board of Directors for the Institute for Priestly Formation and the National Catholic Bioethics Center. He also serves as a member of the Council for the National Catholic School of Social Service at Catholic University and on the Advisory Board to the Cause for Archbishop Fulton Sheen’s beatification.  In February of 2014, Pope Francis appointed Archbishop Kurtz to the Holy See’s Congregation for the Oriental Churches for a five-year term, which ended in 2019. 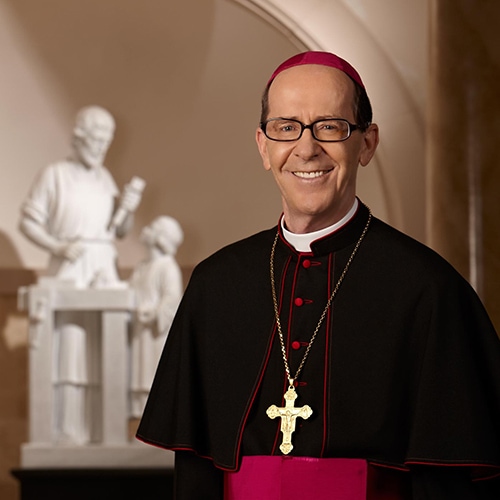 The Most Reverend Thomas J. Olmsted

Bishop of the Diocese of Phoenix

Bishop Olmsted was born on January 21, 1947. Having been reared on a family farm on the Kansas-Nebraska border, he attended a single-room grade school near Oketo, Kansas, and a small rural high school in Summerfield, Kansas. His first contact with Catholic schools came when he entered St. Thomas Seminary College in Denver, Colo., from which he graduated in 1969 with a bachelor’s degree in philosophy.

Prior to his arrival in Phoenix he served as Bishop of Wichita, Kansas, after being ordained Coadjutor Bishop on April 20, 1999. Before serving in Wichita, he served as the Rector / President of the Pontifical College Josephinum, a Catholic Seminary in Columbus, Ohio.

Since 1974, Bishop Olmsted has been a member of the Jesus Caritas fraternity of priests, and thus has been deeply influenced by the witness and wisdom of Charles de Foucauld and by the prayers and encouragement of many brother priests.

For 16 years, Bishop Olmsted lived in Rome, Italy, where he obtained a master’s degree in theology, a doctorate in Canon Law, and worked more than nine years in the Secretariat of State of the Holy See. During the nine years of serving in the Holy See, he resided at the Pontifical North American College and assisted seminarians with spiritual direction. The Most Reverend Thomas J. Olmsted was ordained a priest for the Diocese of Lincoln, Neb., July 2, 1973. He was installed as the fourth Bishop of the Diocese of Phoenix on December 20, 2003. 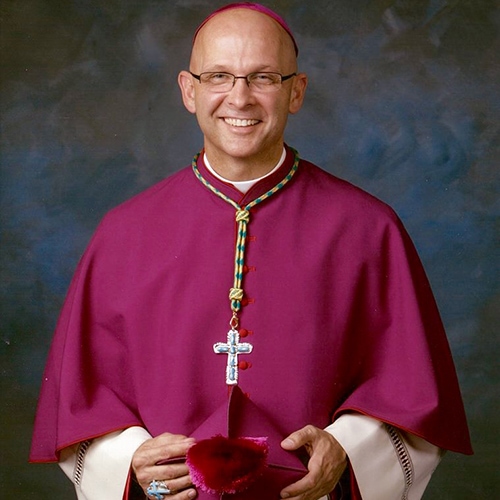 The Most Reverend James S. Wall

Bishop of the Diocese of Gallup

Bishop Wall was born in Ganado, Arizona in 1964 to parents James A. Wall and Joan Wall. Along with his parents and five siblings, he continued to live in Arizona for his young adult life, attending public school in Chandler, AZ, and continuing to college at Arizona State University in Tempe, AZ, where he studied history.

Throughout college, he felt the call from God to become a priest, and after college entered St. John Seminary in Camarillo, California, and was ordained a priest on June 6, 1998 for service in the Diocese of Phoenix. He served as Parochial Vicar at Saint Theresa Parish from 1998-2001 and Saint Timothy Parish from 2001-2002. Bishop Wall served as Pastor of Saint Thomas the Apostle Parish from 2002-2007. From 2006 until his episcopal consecration he served as Vicar for Priests for The Most Reverend Thomas J. Olmsted, Bishop of Phoenix.

During his time in Phoenix, Bishop Wall was a member of the Presbyteral Council and College of Consultors. He served on the Natural Family Planning Board; as the Chaplain for the Phoenix Legatus Chapter; and as a spiritual adviser for Rachel’s Vineyard Retreats. He was a member of the National Advisory Council of the United States Conference of Catholic Bishops and an Advisory Board member of the Institute for Priests and Presbyterate in St. Meinrad, Indiana.

On February 5, 2009, Bishop Wall was appointed by Pope Benedict XVI as the fourth Bishop of the Diocese of Gallup, and was consecrated and installed officially on April 23, 2009.

Bishop Wall’s episcopal motto is “Be Doers of the Word”, from the Epistle of St. James: “But be doers of the word, and not hearers only, deceiving yourselves (James 1:22).” This passage is to remind us that we must not only listen to the words of Christ, but put them into daily action, following the teachings of Our Lord.