Why the Eucharist is Important in Your Daily Life

The Eucharist is so powerful, but we often don’t notice this. It seems that usually God transforms our hearts gradually at our pace over time.

This gentle approach helps to solidify our relationships with Him, as well.

I can personally attest that when I was a young freshman in college, I certainly had a very utilitarian viewpoint. I was looking for power, prestige, money, and getting my own way.

But, I was a faithful Catholic. I was going to Mass on Sunday, and so forth.

One day this kid comes up to me, Bert Martinez, and he goes, “Hey, what are you going to do for Lent?” I just said, “Oh, I’m going to give up meat or something.”

I’m telling you, as the pure grace of the Holy Spirit, this was not on my mind. Suddenly, I think to myself, “If Martinez can do this, I can do this.”

Of course, I resolved I’d go to mass during Lent, and the Lord just gripped me. When I started going, there began that warmth, that peace, that sensitivity to just being hooked, as it were, on the Word of God, of just being at home, a spiritual at-homeness right in the middle of the world.

I was getting hooked. Lent was over, and I just kept right on going to mass every single day, never stopped, was completely hooked.

Then, people would tell me, at the end of one year, they’d say, “Spitzer, you’re really changing. You used to be a utilitarian bum, but, now, you have some kind of compassion and sentiment.”

I’d literally tell them, “I think I’m still the same, utilitarian bum you used to know.” They’d go, “No, really you’re changed.” I was the last to see that I was literally being transformed in the heart of Christ by the Eucharist. 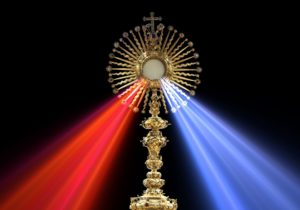 It was happening so subtly, it was like one of these Spitzerian diets. I get on the scale every five minutes. I want to see progress, because withholding food is so painful. The idea though is literally you’re not going to notice, because God’s always going to operate within your freedom.

But, every single time there’s that little moment of conversion when you receive the Eucharist. Every time you’re hearing the Word of God, and you get some new idea, and you start softening up.

He’s kind of wheedling in there with His Spirit, constantly wheedling, constantly coming in, cor ad cor loquitur, heart speaking to heart. He’s getting in there. He’s urging. He’s cajoling. He’s wheedling.

Of course, you wind up changing, and everybody recognizes it, and you’re the last to know.

This happened to me for three straight years of college. Finally, at one point, I started thinking, “My faith is the most important thing in my life. I wonder if I should be a priest… Aw, forget it, I’m going to get killed by my family if I do that.”

(Not by my whole family, I knew my mother would have loved it, leaped through the ceiling, she would have been so happy. My father was a little bit, shall we say, disappointed, and so forth.)

But, to make a long story short, I put it off, put it off. But, finally, it became irresistible. I just could not stop.

One day, I had an experience going to work, and the rest is history. I just decided to see Father O’Leary, the vocation director for the Jesuits, and, as they say, “Look at what happened to me.”

All because of the Eucharist.