What was Jesus’ Mission on Earth?

God the Father is much more than a human father, but sometimes he seems to be less. What human father would ask his own son to sacrifice himself to fulfill the father’s will? Would it not be the other way around?

Well, here’s the deal. What Jesus’ mission on earth is, is sacrificing himself.

And he’s sacrificing himself as an actuality of unconditional love. The idea of Jesus fulfilling the Father’s will, it’s not that the Father’s up there going and saying to the Son, “You gotta go down to Earth now become incarnate. And now the next thing I want you to die.”

What’s going on here is that the Father is, at it were, permitting the Son, the second person of the Trinity, to come, to incarnate himself. And to give himself in complete self-sacrifice.

Jesus’ Mission on Earth: The Definition of Love

So what is Jesus doing? 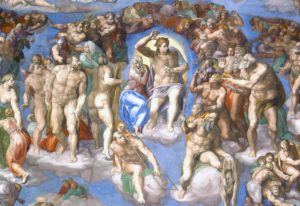 He is giving himself, right? He is literally sacrificing himself intentionally to bring an unrestricted act of love into the world.

Why would he want to bring an unrestricted act of love into the world? Because bringing that love into the world, making it real within the world, with its infinite capacity to extend love, mercy, compassion, forgiveness, and healing to everyone who believes in it and comes into it, is Jesus’s whole reason for being here.

Now, I’m not just going to talk about love. I’m talking about bringing love, real love, through a real concrete, historical action. And the highest form of love is self-sacrifice, to give one’s whole self away for the good of the other.

Does the Father have a similar intention? Yes. He’s not demanding this of the Son. The Son asks the Father in the Garden of Gethsemane, “Let this cup pass from me, unless it’s your will.” In other words, Jesus is telling the Father, “I want to do what’s going to redeem the world.”

He knows what the Father’s will is.

So when Jesus says, “But if not, then thy will be done,” what he’s saying is, “Thy unconditionally and unrestrictedly perfect loving will be done.”

And of course he wants to be in conformity with that unconditionally and perfect loving will because that is what’s going to redeem the world.

And if that’s wants necessary to redeem the world, so that darkness, the devil, no human sin can ever again overcome and become dominant in the world, then Jesus says, “Then thy will, they unconditionally loving will be done.”

It’s not that at all.

It’s really a dialogue between the Father and the Son as to how bring the unconditional love into the world that will save the world forever.