What St. Thomas Teaches Us About Christ Will Surprise You

Thomas, called Didymus, one of the Twelve,
was not with them when Jesus came.
So the other disciples said to him, “We have seen the Lord.”
But Thomas said to them,
“Unless I see the mark of the nails in his hands
and put my finger into the nailmarks
and put my hand into his side, I will not believe.”
Now a week later his disciples were again inside
and Thomas was with them.
Jesus came, although the doors were locked,
and stood in their midst and said, “Peace be with you.”
Then he said to Thomas, “Put your finger here and see my hands,
and bring your hand and put it into my side,
and do not be unbelieving, but believe.”
Thomas answered and said to him, “My Lord and my God!”
Jesus said to him, “Have you come to believe because you have seen me?
Blessed are those who have not seen and have believed.” John 20:24-29

Today’s feast belongs of course to one of the original apostles. Thomas of course is most noted, unfortunately, for the fact that he was the doubter. And of course there can be no doubt that he probably was a doubter because, it would’ve been completely gratuitous to write this up in Sacred Scripture if he were not, and to have his reputation be so defined.

But he was a doubter and there is no doubt there that he has that skeptical sort of bent to him and he’s not going to be taken in as it were by any good news, any Pollyanna stuff. He’s going to be a hold out to the end with the bad news and Murphy’s law.

And that was kind of the mentality. You can almost feel it when he says, “I am not going to believe until I stick my hand, my fingers right into the nail prints in his hands.” And the drama is pretty clear. He has been disappointed. He has been just so severely let down.

It’s just hard for him to crawl as it were up over the crucified Christ to come back to a kind of a belief in who he believed Jesus to be in the ministry. And even when his own friends and fellow apostles say, “we’ve seen Him, we all saw Him.“

This is the thing about Thomas, “I’m not going to believe any of you guys either until I get the full on apparition here.” So Jesus comes and says, “Go ahead. Put your fingers right on in.”

And Thomas is the perfect Blaise Pascal advocate. (Pascal once said, “the skeptic who comes over the line becomes the most passionate evangelist.”) And so we have Thomas, a skeptic who comes over the line, won’t even believe his own friends, won’t even believe people that he’s been on ministry with for three years. And when Jesus appears, he gives the most ardent testimony and confession of Jesus, not only His resurrection, but His divinity, instantly.

How could he have said Deus mei, the “Lord of me, the God of me”? There’s just this complete affirmation of Jesus’s divinity. And you can see that Jesus of course, understands the skeptic, understands Thomas great disappointment, his inability amidst his depression practically to crawl over his loss of hope. 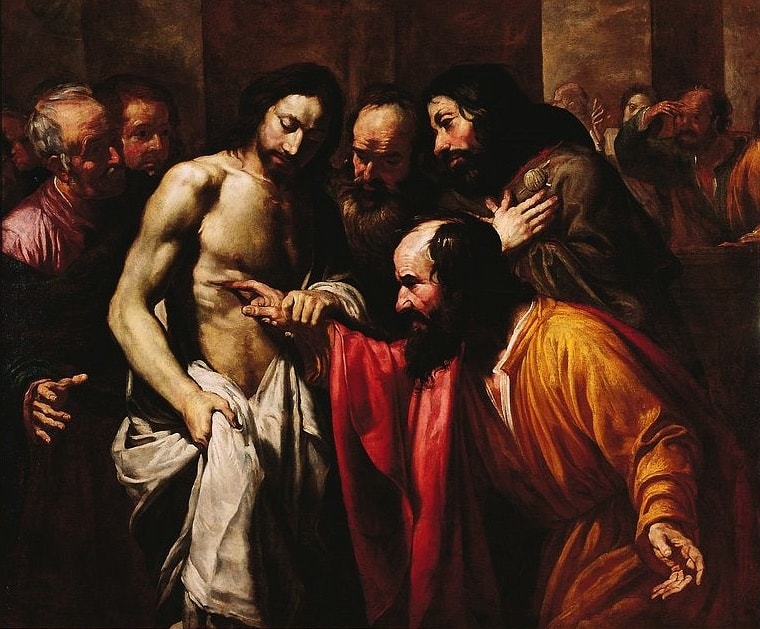 And then when Jesus restores it, it’s almost as if when he restores it, he’s just giving Thomas the ability to not only get what he had lost back, but to know one thing clearly, never doubt again, never allow this kind of disappointment to make you lose hope again. And he goes, leaping like Blaise Pascal says, right into this confession, which is the confession of all confessions of Jesus’s divinity.

And again it’s the love of Jesus. It’s His coming to Thomas, right in his weakness, in his skepticism and this loss of hope that restores Thomas and Thomas repays him a hundred fold.

Now, of course, the actual historically verifiable story of Thomas sort of tapers off after this juncture. We know very little if we look at the ecclesiastical histories of the Church, but there’s a strong tradition that Thomas actually went outside of the Roman Empire.

So while Peter and Paul and several of the apostles were staying within the Roman Empire, Thomas was one of the few that actually took the ministry, the evangelization beyond the Roman Empire. And it was said that Thomas went down to India. But of course we don’t have any written indication of this until three centuries after Jesus, so maybe you’re a little skeptical.

You think to yourself, “Hmm, you know, did he really get down there?”

Well, of course we know that when the Jesuit missionaries got to go down there, they discovered that there were all these Christians that were sitting there in southern India and they said, “well, who evangelized you?” And these southern Indians go, “oh, St Thomas.”

And they had kept this faith alive even though they did not have, in some cases, priests in some of those areas for a century. But the faith stayed alive. They were so well catechized, and they’d kept everything alive in their heart through the word that they had received initially, seemingly from Saint Thomas.

Well, what’s the point of the whole feast of St. Thomas? Of course, the point is that God comes to us in the time of our need. He comes to us, when we’re down and out, and we’re just about ready to give up. As the disciples on the road to Emmaus saying, “we were hoping that he was going to be this guy, but they crucified him, you know,” and of course, Jesus comes right there. Ushers himself right in with both love and power and spirit. And of course, you see Thomas who willingly gives his life to spread the gospels literally to the end of the earth.