How Do You Cope with Unhappiness When Surrounded by Sin and Ignorance?

Sometimes you’re going to have to be a force of “non sin” and “non ignorance.”

Perhaps you’re surrounded, maybe by your colleagues, or something’s going on in your family that really is persistently sinful and ignorant of God. Perhaps those around you even rejoice in that sin and ignorance.

Of course, it is an extremely upsetting thing, but Jesus tries to counsel us here. He says don’t throw your pearls before swine, right? Of course today we might think, wow, that’s a really harsh image.

But, in point of fact, what he’s saying there is that there’s only so much convincing you can do.

Eventually, you have to be your own person. You have to start taking solace from your religious community. Presumably you go to church on Sundays. Maybe it would be possible to get to that religious community, to do some things and to surround yourself with what I would call level three and level four friends a little bit more.

Sometimes we really do have to reach out. Maybe do something, if we can, on the weekdays. Maybe if we have a chance to go to Mass with a community of people that are more level three and four during weekdays as well as weekends. Maybe it would be to join a community service group or something of that nature. 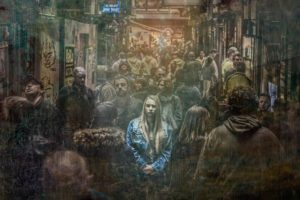 I think the main thing is, if you really feel you’re surrounded by sin and ignorance all the time, you’re going to have to expand if you can. I know some situations are very, very difficult indeed. But, try to expand that group of friends.

Then invite your family members, or some of your colleagues, into that new group of friends. Doing that may present them with ideas that don’t come from you. Remember, familiarity breeds contempt. So around your family, well, it’s just you who’s saying this. But, if you can introduce them to people who focus on Happiness Levels 3 and 4, it may be able to open their eyes a little.

But if they just resist, if they ridicule it, if they think they know so much, then at the end of the day, that’s on them. At the end of the day you have to not throw your pearls before swine, you’re going to have to basically let them alone a little bit, until they’re ready to hear.

You might think, “Well, when are they ready to hear?” When they suffer. And of course people are not going to be immune from suffering forever. They could take that suffering and turn it into despondency, and that would be a very unfortunate thing. Because that’s going to lead to  people really getting depressed and into despair and into real violent anger towards others. That’s not good.

But suffering always holds the potential to lift up people, who’ve just been real rats and really arrogant people, who have built their lives around Happiness Level 1 and Level 2.

Then you’re there to be the support, you’re there to hold out something like, “I’m begging you to pray with me. Let’s just pray together and let God lead us out of this.”

And that’s important. It can change lives.

But it’s easy sometimes, even though we think we’re doing the right thing, when somebody’s suffering sometimes we aren’t always so quick to reach out that hand. We like to see them maybe dangle and suffer for a little while to make up for past transgressions against us. We should avoid that at all costs.

Now, maybe by being with those Level 3 people we mentioned earlier, that will give you the strength maybe to deal better with those in your work and family environments. So possibly you’ll find that they don’t affect you as much as before.

It really does tone down the pressures we feel from being surrounded by sin and darkness. It really makes a huge difference.

But don’t let the sinful and ignorant dangle there. I mean it’s so easy to say, “you’ve made your bed sleep in it.” Don’t do that, Jesus says to help them.