What is the Comparison Game?

Last week, we discussed an evangelization approach that emphasizes the 4 levels of happiness. We all want to be happy, but often we find ourselves trapped in emptiness and malaise.

This week, I’d like to focus a bit more on the second level of happiness, and what it has to do with the comparison game.

What is the Comparison Game?

As humans, we need self respect and the respect of others. It drives us to get off the couch and make something of ourselves. But that shouldn’t be your only goal in life. Because if you don’t look any farther than that, you’ll find yourself trapped in the comparison game.

Players of the comparison game score themselves based on how they stack up against other people. Are they the prettiest? The smartest? The strongest? The most popular? The most powerful? If you’re trapped in level two, you’re either a winner or a loser, or somewhere between the two, not loser but at risk. Not a winner, maybe someday.

Being a loser is the worst. You feel inferior to everyone and everyone looks down on you and avoids you. 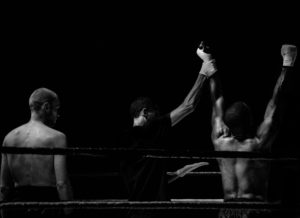 Terrified of letting yourself down any further, your comfort zone shrinks as you avoid any new pursuits at which you might fail. You’re lonely, isolated and depressed. Worse, after living with this for a while you start to enjoy it. Self pity takes over, leading to fantasies of self destruction, rejecting the world around you which has judged you unworthy.

But in the Comparison Game, Winners are Losers Too

So if you’re going to stay at level two make sure that you’re a winner. That way, everyone will recognize how fantastic you are, and they’ll want to be around you, which is good because you need the respect to affirm your excellence. But someday, someone younger, smarter, better will come along. What? How dare they forget your accomplishments? These fools must be reminded that you’re the best.

If your only happiness comes from being the best, the future holds shame, loneliness and despair. In other words, winning is hell too. If you’re in between, everyone become an instant rival and you need to be constantly on your guard. You’re never safe to simply be yourself because any mistake could result in rejection from the winner’s circle. Instead you must be vigilant for any weakness in your rival so you can pounce and use it to surpass them. In short, you become a shallow, paranoid and lonely person.

No matter what your ranking is in the comparison game you lose. You end up alone and empty. The only winning move is not to play. You need a way out. You need to take your search for happiness to the next level.